Flow of talent in Orelia 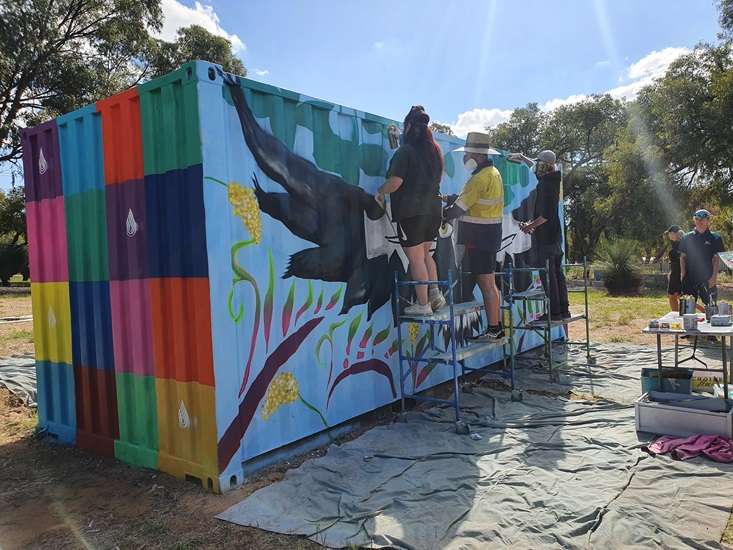 Local Kwinana young people let their creativity flow during April, when they partnered with The Zone and Water Corporation to deliver a beautification project at Orelia Primary School.

Young people aged 15-24 years worked with artist Samantha Prentice to plan, create and install a mural on a sea container on the school grounds. The sea container was previously a target of graffiti. Now, as a beautiful urban art mural it prevents graffiti and raises awareness of being water wise.

Mayor Carol Adams said it was great to see the outcome of the project, that not only provides an opportunity for young people to learn a new skill, but highlights the need to be water aware.
“This is a great example of collaboration between the Young people in Kwinana, City Staff, our local school and Water Corp” Mayor Adams said.
“The piece of art that has been developed by our young people, illustrates what they see as a connection with our water ways and the birds and flowers they frequently see around Kwinana.”
The project was funded through a City of Kwinana Neighbor Day grant and Water Corporation grant and was supported by water wise workshops for Orelia Primary School students.

Water Corporation are constructing a new water pipeline in Orelia to improve water supply reliability in the City of Kwinana. Water Corporation General Manager Customer and Community Karen Willis said Water Corporation was thrilled to support projects that help beautify neighbourhoods and educate the community about the importance of water.
“By involving local groups and young people in community water projects, we start the conversation about why we need to save water now for the future, and hopefully encourage a next generation of future waterwise leaders,” Ms Willis said.
“I congratulate the City of Kwinana, The Zone, and the local community for their efforts on this project, and thank them for their patience while we undertook important works in the area.”